It’s amazing to note that BrainShine created these ads 20 years ago! Richard “Dick” Kulesh was a friend and fellow music lover who asked for some help promoting his new line of banjo tome rings to the public and the industry. Dick was a wiz with metal and had become the sole supplier of banjo tone rings to Gibson just a couple years earlier. With this offering, Dick was looking to create an affordable but innovative ring to rival the sound of his top sellers.

With text like “Imagine the greatest scientific mind of the 20th century after a long day of relativism pulling out his five-string and relaxing with a little Cripple Creek” (Einstein) or “In every element of his life (particularly alternating rolls, slides and pull-offs) here is a man who seeks out purity” (Pope John Paul), these ads really spoke to the banjo enthusiast. Thanks to Guy Hufferd for his great copywriting!

Since then, Dick, and eventually his son, manufactured rings for use in Gibson and Rich & Taylor banjos and have sold countless numbers to private luthiers and individuals throughout the world. These coveted 10-hole rings now sell in excess of $200, and have solidified the Kulesh rings as some of the best ever made. We’re glad we could help! 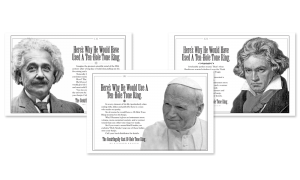 When I First Met Tony Gwynn
Scroll to top